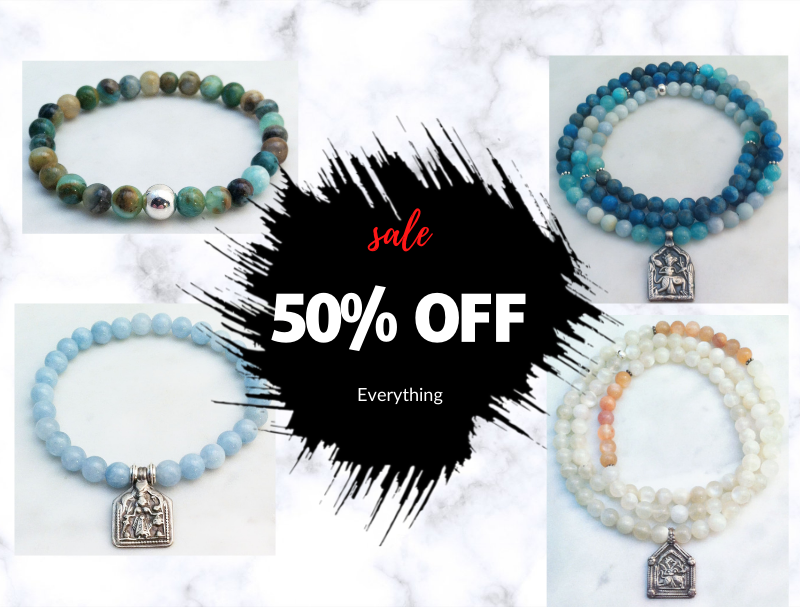 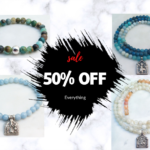 Once a year we make our signature holiday mala collection. This year our collection features 50 one of a kind antiques, malas and bracelets from the Himalayan plateau. Now available, only on Etsy.

This Antique mala beads collection has been a decade in the making. I first encountered these antiques in Rajasthan during my PhD fieldwork. I trekked and camped through the Himalayan Plateau meeting tribal people in the remote landscapes of Northern India. These antique pieces come from places that are only accessible by foot in the farthest reaches of the Himalayas. I collected these antiques one by one through Estate sales, negotiations with private collectors, and from traveling merchants from Northern India, Kashmir, and Tibet.

These amulets were made between 1790 – 1950 by expert craftsmen from the Himalayas. Starting in the 18th century tribal people in Northern India began casting this type of amulet. They were made by hammering silver into a plate meticulously by hand and with absolute precision. It was customary to wear an amulet depicting a deity as a form of protection, reverence, and faith.

Each was a private commission at the time it was made. It was made by hand, by a local silversmith, using ancient techniques particular to the Hill Tribes of the Himalayas. At the time of its making it was blessed by a Hindu priest, as was customary at the time. This blessing served to empower the amulet. It was believed that the deity depicted would aid the devotee when called upon with the aid of this blessing.

These amulets are becoming very rare. Most have been melted down to salvage their silver. Tragically, the artwork is being lost in this process. As Indian modernization pushed into the Himalayan Foothills, the tradition of making these was mostly lost, and now only in the farthest rural communities can you find the remains of a tradition that is centuries old. In purchasing these pieces, it was my hope to preserve the art and return it to its place in spiritual devotion. By purchasing a piece from this collection you are ensuring that the art is preserved and you are holding a piece of the spiritual history of India and Nepal.

Our other mala beads in this collection feature stunning stone amulets from Buddhist temples.  Thailand Clay Holy Buddha amulets, Phra Somdej, old Antique Relic Votive tablets. Blessed by monks, these are given to devotees for donations. They are matched with A grade gemstones to create stunning limited edition malas for the 2021 holiday season.