Moonstone, aquamarine, amazonite, and crysocolla have been used since time immemorial to call in the Divine Feminine.

Moonstone has been a clear connection to the enchantment of the moon since ancient times. Connected with the feminine, moonstone deepens one’s intuition. To women, moonstone reveals their feminine power and capacity of clairvoyance, and gives rise to the kundalini energy. Moonstone supports men to expand into the feminine aspects of their nature, and inspires the right side of the brain, promoting nonlinear thinking and emotional balance. Moonstone is believed to powerfully affects the female reproductive system, improving fertility and inspires ease in pregnancy and childbirth, relieves menstrual problems and change-of-life. In India, Moonstone was the stone of the gods and goddesses, of hope and spiritual clarity through cessation of the ego.

Aquamarine has long been considered a gemstone that acts as a doorway to communicate with the Goddess, both within the self and in Her outer manifestations. A stone of the Water element, aquamarine beings one in touch with the subconscious. In doing so, it aids in speaking one’s deepest truth by meeting with the Divine Feminine within. For men, Aquamarine helps dispel emotional numbness and opens a freedom to communicate feelings. Aquamarine is said to calm frustration and helps keep anger and rage at bay.

Amazonite is said to have acquired its name from the Amazon women warriors who praised the moon goddess, Diana. Known as the Stone of Truth, Amazonite empowers one to unveil one’s own truths and integrity, and to move beyond fear of judgment or battle with others, and to live in alignment with those beliefs and values. It grants the freedom to communicate one’s thoughts and feelings, and to create strong and clear boundaries. Amazonite is believed to aid in speaking one’s inner truth with confidence, and to make what we speak come true.

Chrysocolla is a gemstone for the empowerment of feminine energies, for both women and men. It is a stone of the Goddess, and resonates her ancient and enduring energies. It is closely attuned with the vibrations of the earth, and can facilitate one’s emphatic connection to the Earth’s energy. As a gemstone of expression, chrysocolla stimulates the throat chakra, opening the gateway to expressing the sacred, with gentleness and power.

Here are a few of our lovely malas and bracelets that feature these stunning feminine energy gemstones: 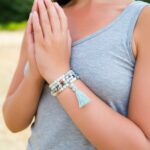 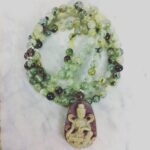